The story of Kecskemét’s peach pálinka:

If we ask foreign delegations or tourist groups which word is the one, they acquired first during their stay in Hungary, the first three answers on the imaginary questioners must include „barack” (peach) and „pálinka”. Edward Prince of Wales was also touched by his visit to Hungary in 1935, because a lot of people do not know but the first Hungarian word the English heir said was „báráck”. In the Duna Palace where the prince stayed a reception was held and on the table two outstanding product were put, the Tokaj wine and in a crystal-barrel from Orosháza from the distillery of Kecskemét a 1926 peach pálinka. The second product was so well liked by the prince that during his departure next to the sights of Budapest he also mentioned the pálinka from Kecskemét as a dear memory of his stay. It’s not a coincidence that in the title the quote from the prince is a well-known phrase throughout the country.

But from where did this success story started? Who were the first who brew pálinka? To know the beginning a local written source is the key.

Kálmán Szabó, then Tibor Iványosi-Szabó both pointed out in their study of the city that the start of pálinka brewing is not connected to peaches but rather to grapes and wine, since the concept of Kecskemét’s pálinka first appeared at the end of the 16th century as “burnt wine” – differentiated from “raw wine” – which as a gift from the people of Kecskemét Pasha Suleiman could experience. 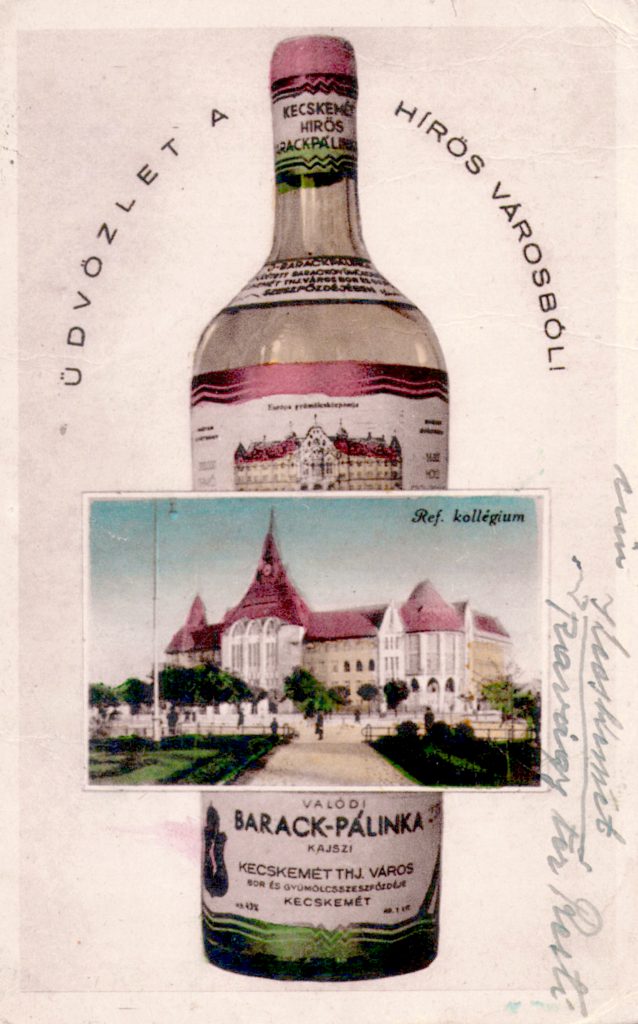 Saint Miklós was a real person (he took part in the synod of Nicaea in 325), however mostly legends remained of his life story. The most popular of these legends is the one connected to December 6th. In the Middle Ages Saint Miklós was the patron saint of merchants, in a lot of guilds which were named after him merchants gathered. The Saint Miklós churches marked the most important trade routes throughout Europe. Between Buda and Szeged, Debrecen and Bécs, Kecskemét was also an important stop to tourists and merchants.

That’s why the personality cult of Saint Miklós is a part of the traditions of Kecskemét. The city’s earliest monument building is the Franciscan Church, or in other name the Church of the Friars which is next to the Reformed Church and the City Hall. 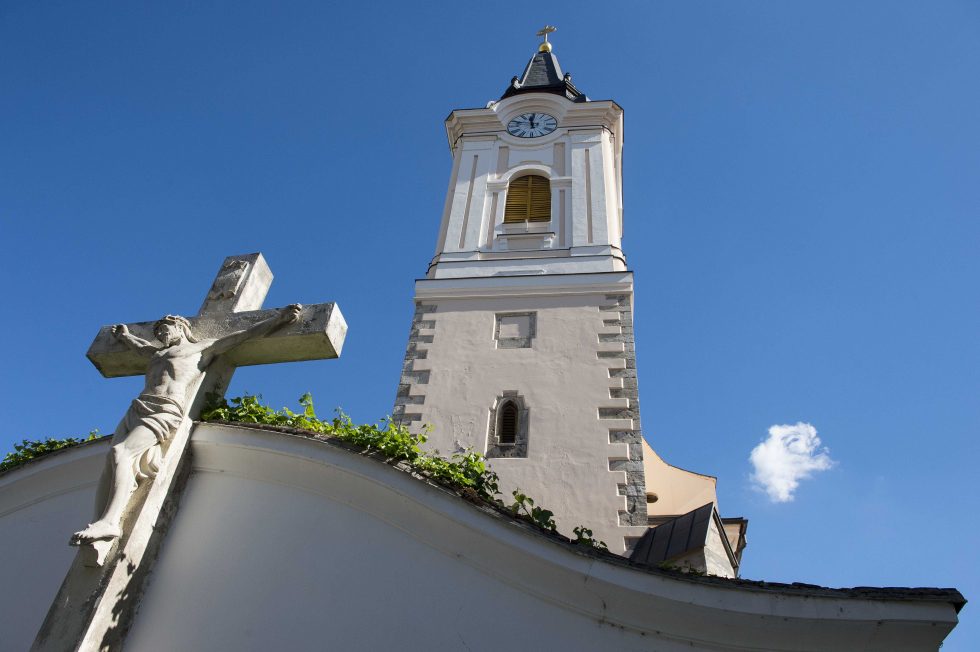 The motto of Kecskemét circles back to 1809 and is connected to the Transylvanian Bánffy family.

Baron László Bánffy wanted Kecskemét to rent out his estates in Kecskemét, Borbás, Alpár and Szentkirály, that’s why in 1808 he and his family visited our city. The friendly greeting and kind hospitality made the baron’s 14-year-old daughter, Erzsébet promise to gift an embroidered silk flag to the noble bander of Kecskemét.

In April of 1809 king and monarch Ferenc I called the nobles for an armament, that’s when the French – Austrian wars started. Erzsébet Bánffy true to her promise sent a self-embroidered flag to uplift the mobilized soldiers. Due to the wars the flag arrived late and it couldn’t be given to the soldiers. The flag along with the young lady’s letter were put into city’s archive.

Erzsébet Bánffy’s name is not only remembered in history because she gave a flag to the people of Kecskemét. The city’s motto is connected to her, which was embroidered on one of the sides of the flag around the city’s crest: “Neither height, nor depth can frighten us.” 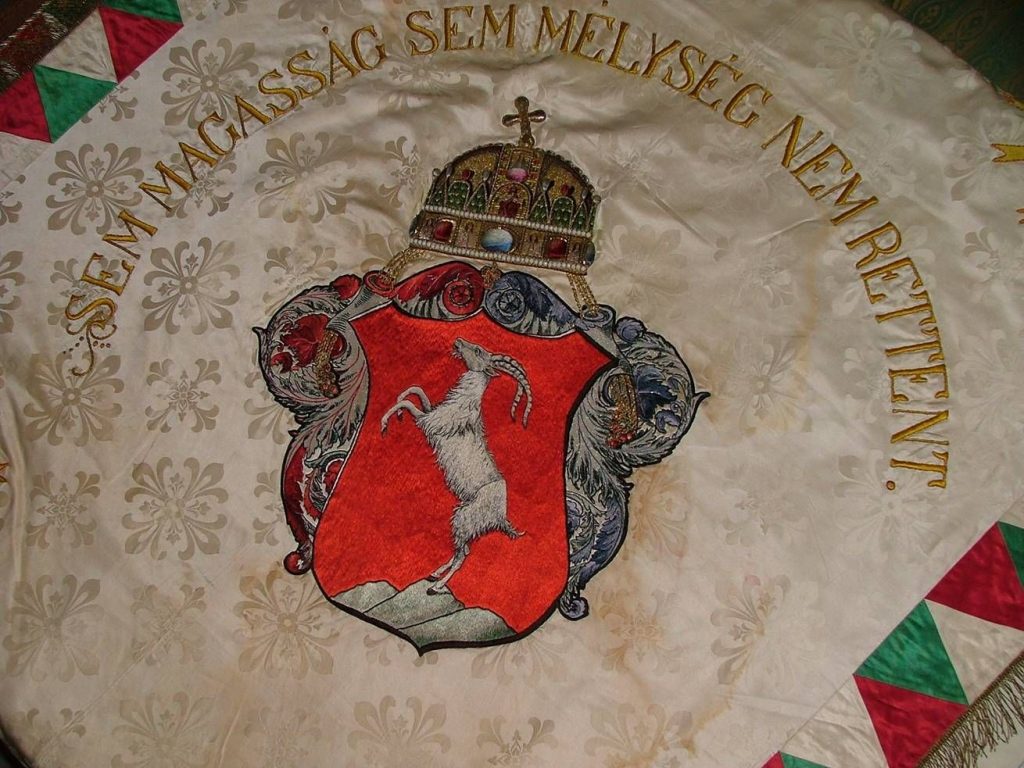 Where did Kecskemét got its name from?

In 1353, in the written sources first appeared the name of our city (Kecskemét), from then it barely changed.

Kecskemét in its 1353 source was viewed as a village, on the other hand after 15 years, in 1368 it was described as a transitional type of market-town. A very important requirements of the market town’s status were the fairs.

The settlement which was named Kechkemeth in 1368 went through a lot of name changes. The name changes have hidden meanings which shape today’s name of our city.  In the first decade of the 20th century literature also gave some answers to the centuries-old mystery.

A good example for this is the ethnographic collecting, which is from an old family from Kecskemét. Born in the 1880s, farm working, illiterate lady’s tale says our city was the main passing route of the goat flocks, they grazed every green flora and fauna during their way. However, one day there was a goat who got an eye on the green plant in the tower of the Big Church and immediately headed for it. According to this legend, this incident happened exactly 1 pm. so the bell ringer of the Big Church named this goat to the leader of the flock. The folk tradition says this goat was the model of the crest of the city. 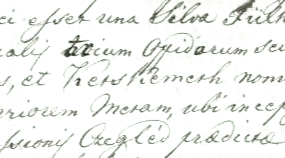 The legend of the speaker’s robe:

The story of the miraculous kaftan is connected to the events of Kecskemét during the period of the Turkish occupation.

The story is still well known thanks to the famous theatre play: Kálmán Mikszáth The speaking robe. The author spiced it up a little bit because he wrote a love story into the original piece. In 2018, on the 650th anniversary of Kecskemét, the audience could also see the comical play in the Katona József National Theater.

The story is shortly the following: in 1596 Mohamed sultan the 3rd marched to Eger through the Danube-Tisza alley with his army. He invited the ambassadors of Kecskemét to his camp in Alpár who arrived loaded with gifts. According to a local report “They shall carry one hundred oxen, six hundred sheep, and fourteen chariots of bread”. The people of Kecskemét asked for a Turkish foreman so he could protect the city from the harassing raiding Turks. The sultan does not give such a person but instead he sent an ornate caftan for the city. According to the tradition, when they wore this robe and shown it to the passing Turks, they bend the knee and kissed the edge of the robe this way the Turks only stayed in the city when the judge granted permission. Its “magic power” was given by the words embroidered among the ornaments: “obey the wearer of this robe”. 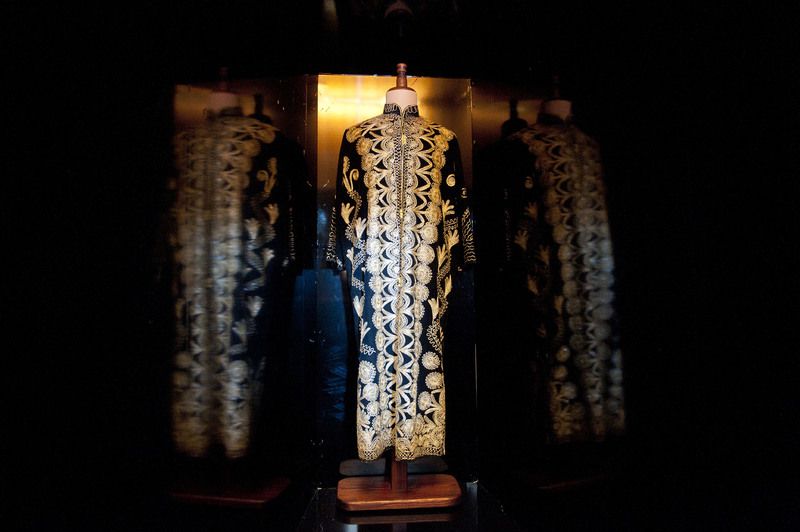 A street near to the city centre named after Kaszap Taltos (In the autumn of 1930 the Teacher Training Institute was established there). The name of the street was the same from the middle of the 19th century, only in 1952 was temporary named Makarenko Street. In the word tradition of Kecskemét the Kaszap Well phrase also appear.

Kada Elek the mayor of Kecskemét was well-known for his ethnographic interest, one day he wrote the following: “Ki a Kaszap vizét issza / Vágyik annak szíve vissza” (who drinks Kaszap’s water/ his heart desire to come back), so in the old days families with daughter(s) were eager to give Kaszap’s water to the suitor(s). Adding to this tradition, the forefathers of the city thought that the native-born citizen in Kecskemét who was born inside the line of the Kaszap well which means the inner side of the old city ditches (nowadays this is the line of the inner boulevard). However why a Taltos is the symbol of the old folk religion and why they preserved the name of Kaszap in the street name and memories?

His figure and legends evokes the period of conquest. According to the legend, when prince Árpád marked out Kecskemét as a habitation people were disappointed and they thought that not even drink water could be found here. Árpád asked Kaszap for advice, Kaszap asked Árpád’s well-known sword which was used during several winner war. He started to dig with it after a while well-tasted and abundant water broke out from the sand to the great delight of conquerors.

The draftsmen and story tellers of Kaszap Taltos would like to get the answer from this legend which was Mátyás Bél question too, how could become Kecskemét a blooming market-town in the middle of the sand steppe even without any proper facilities.

You can find out more about which cookies we are using or switch them off in settings.

This website uses cookies so that we can provide you with the best user experience possible. Cookie information is stored in your browser and performs functions such as recognising you when you return to our website and helping our team to understand which sections of the website you find most interesting and useful.

Strictly Necessary Cookie should be enabled at all times so that we can save your preferences for cookie settings.

If you disable this cookie, we will not be able to save your preferences. This means that every time you visit this website you will need to enable or disable cookies again.